It was so cool to be part of this show all about hand-painted shoes! Click the image for photos from the opening!

I'm excited to be working with Curina.co, a platform connecting artists to art appreciators by making works available on a rent-to-own basis. Check out Curina.co for more info.

Honored to be part of this show with these legendary artists!

Longview visits with Megan Olson to discuss how 90s hip hop culture & the formalism within graffiti have influenced her abstract paintings, grounded in nature, harmony and line.

January 11, 2021: Solo Exhibition in NYC,The Language of Form and Color

My work is featured in a group exhibition at Foley Gallery on the Lower East Side, NYC. Four of A Kind on Artsy.com

I'm pleased to share that I've been accepted as a ChaShaMa artist with a studio at the Brooklyn Army Terminal. You can check out my artist page here. 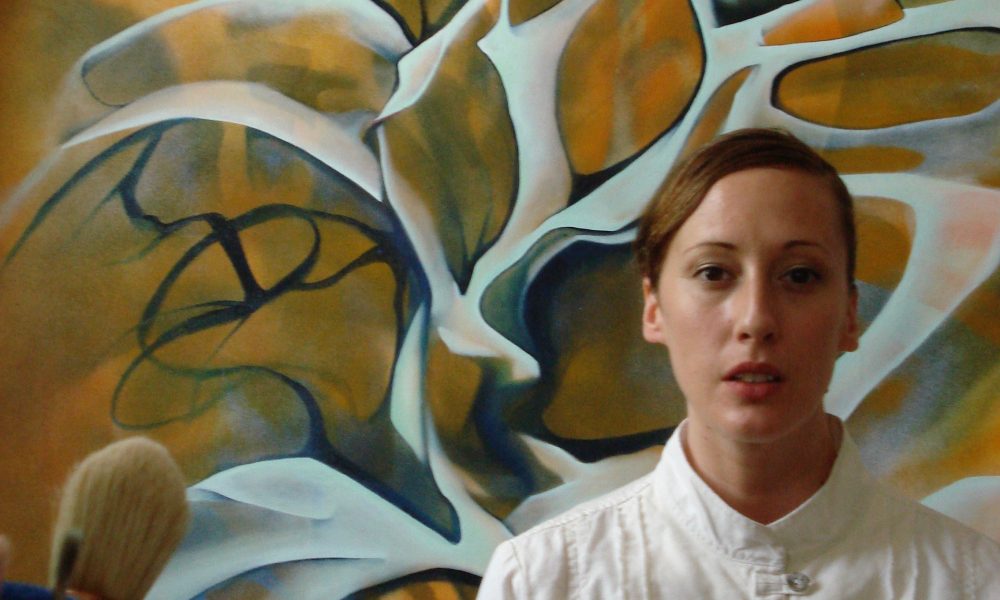 Very honored to be featured in an interview on VoyageChicago. The piece behind me is called Untitled Orange, and is now housed in Taekwang & Ilju Academy + Culture Foundation, Seoul, Korea. 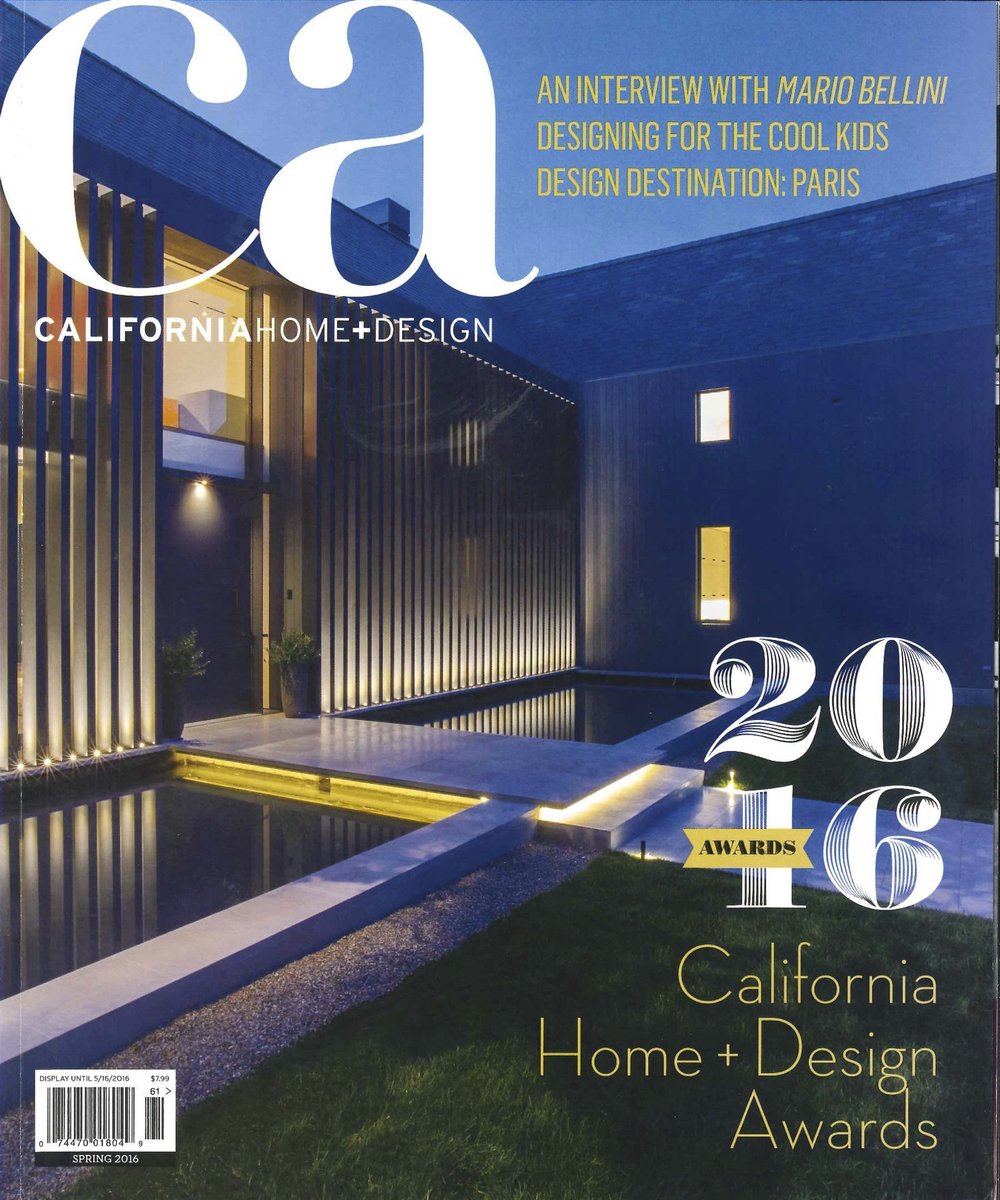 My work can be seen in this Houzz feature about Tiburon, CA based designer Caitlin Moran. It's always great to see my work in someone's home! (Photo by Caitlin Moran Interiors) 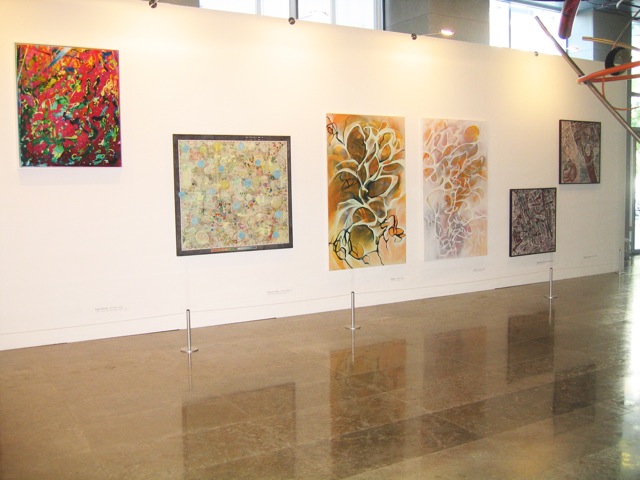 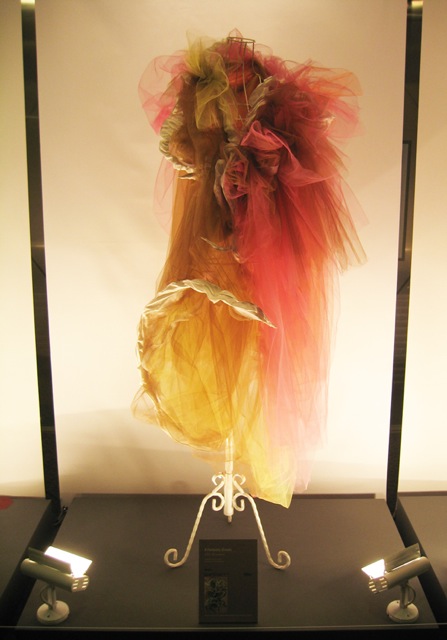 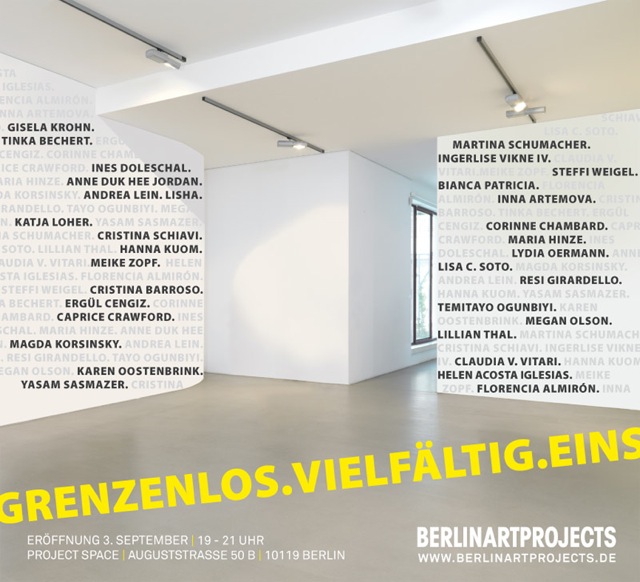 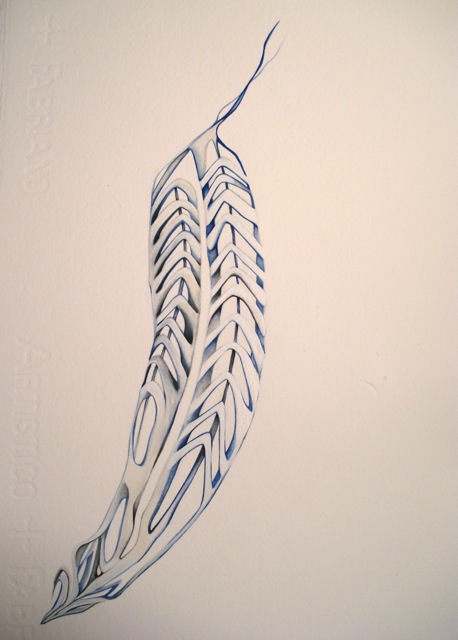 To celebrate his birthday, Megan's dear friend Peter commissioned her to make a drawing which could also be used for a tattoo. The drawing - titled "China Bird" - then became the first tattoo of Megan's art.

VIDEO FROM BEYOND THE CHAINS OF ILLUSION


Berlinerkunstkontakter.de featured video of the opening night on their website.

PHOTOS FROM BEYOND THE CHAINS OF ILLUSION


SOLO SHOW IN BERLIN: BEYOND THE CHAINS OF ILLUSION 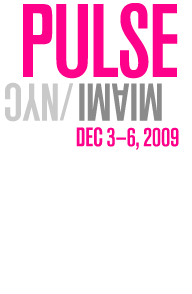 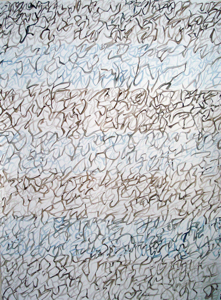 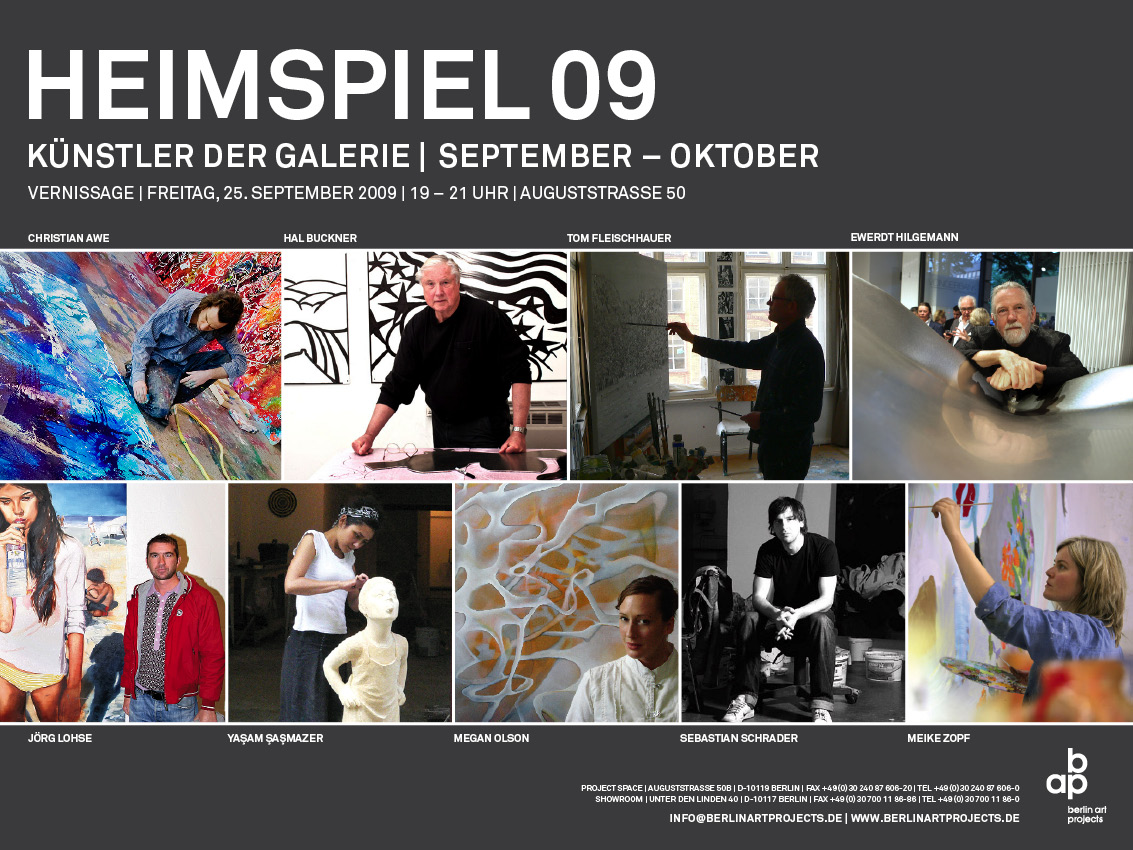 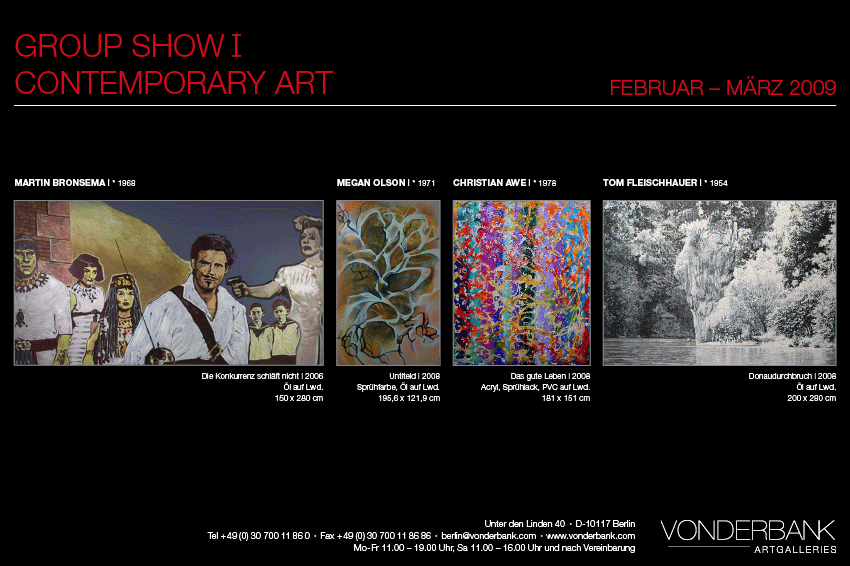 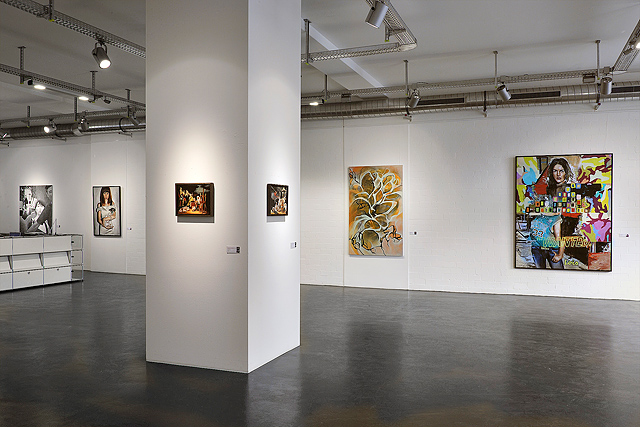 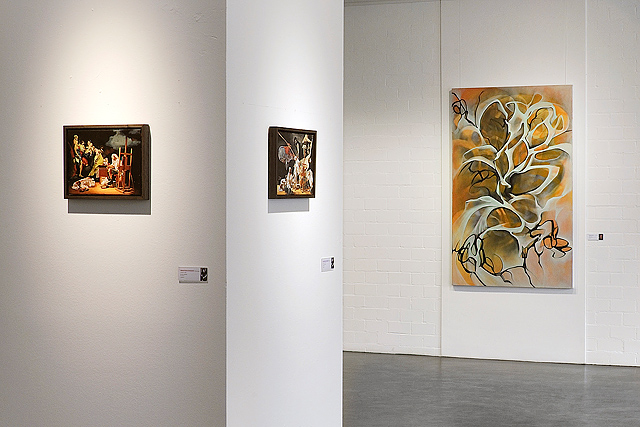 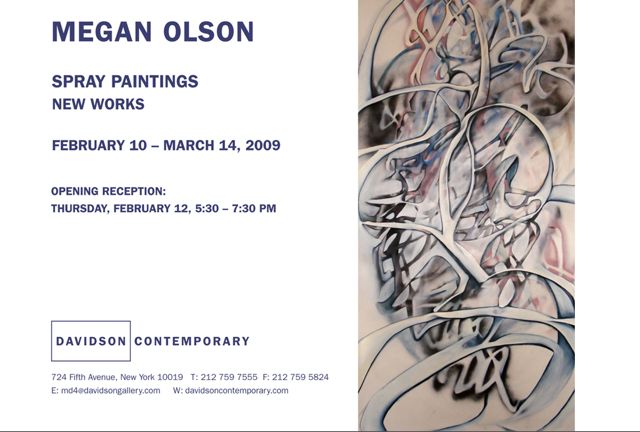 February 2009: Megan Olson work featured on the cover of Love Without Cause 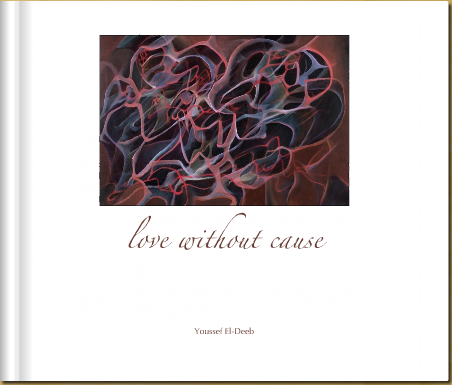 Megan Olson's work is featured on the cover ofLove Without Cause, a book of poetry by filmmaker Youssef El Deeb. Click Here for a full preview of the book. 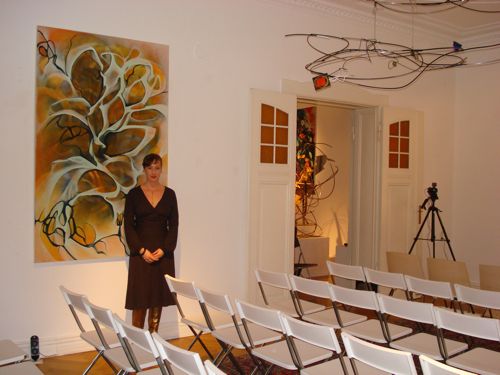 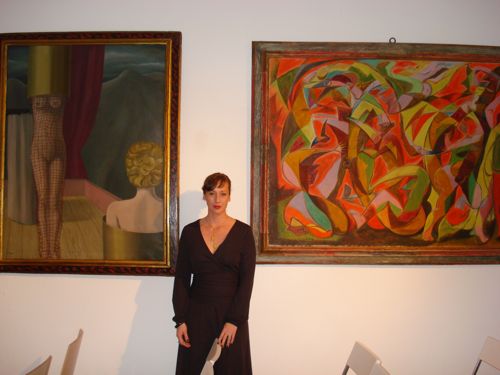 Megan Olson moved to Berlin in 2009 and attended a private salon, featuring art critic Donald Kuspit. Olson's work was hung with works by Carrington, Magritte, and Masson on loan from the Pietzsch Collection. 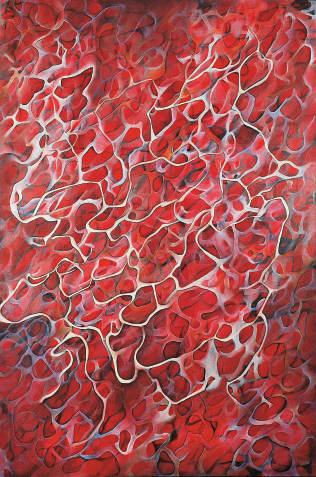 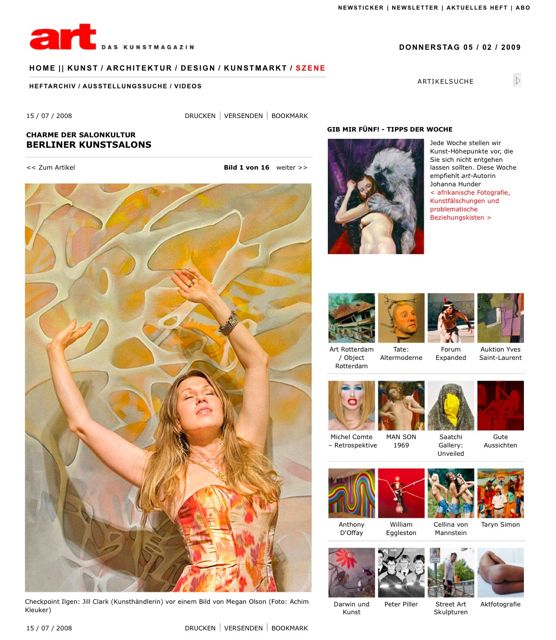 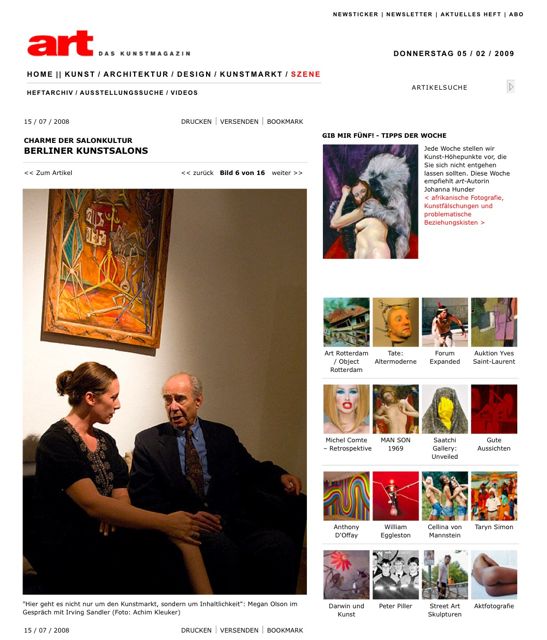 ArtMagazin.de published a piece featuring curator Jill Clark posing in front of Megan's work (above), Megan sitting with Irving Sandler in front of a piece by David Smith (below). Click here for the full article and more pictures. 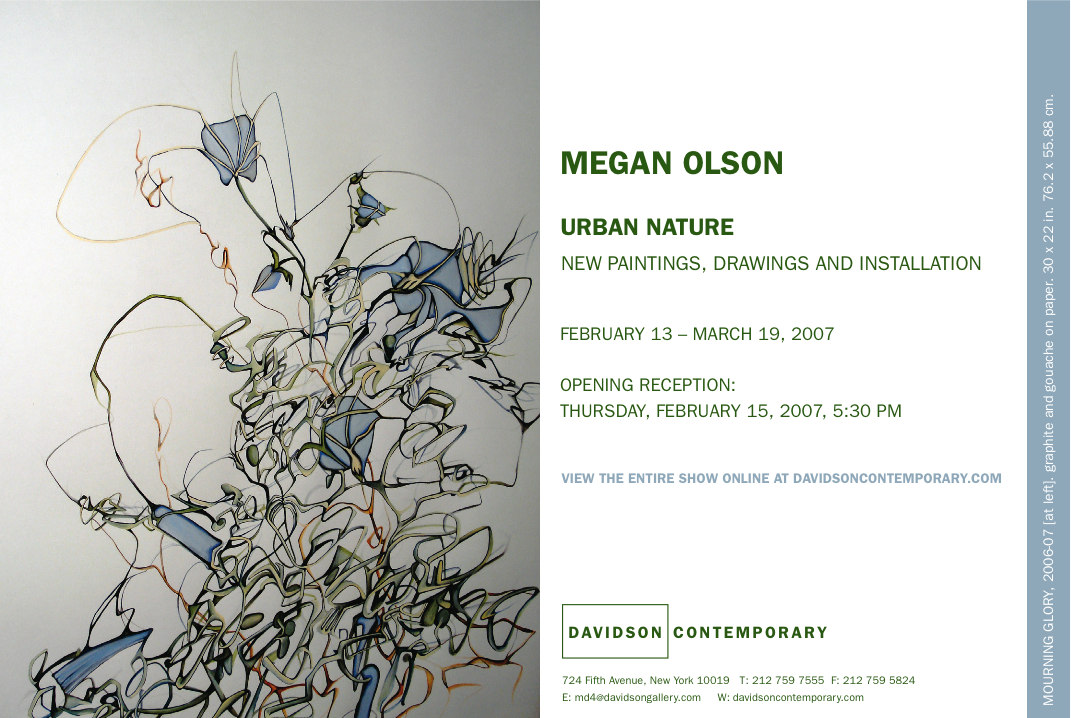 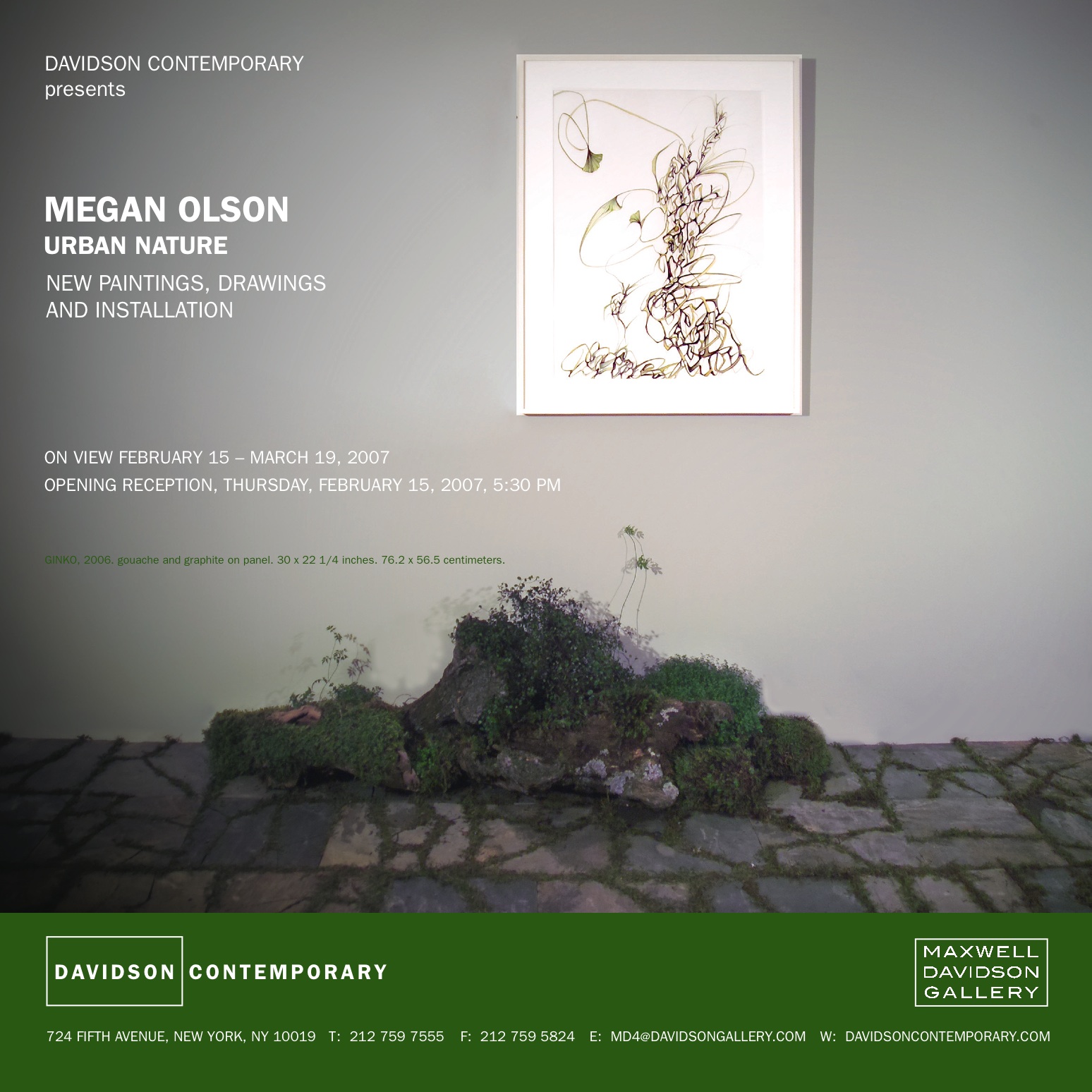 Discussion on The Substance of Art vol.1 Published : Spring, 2006 - the Netherlands 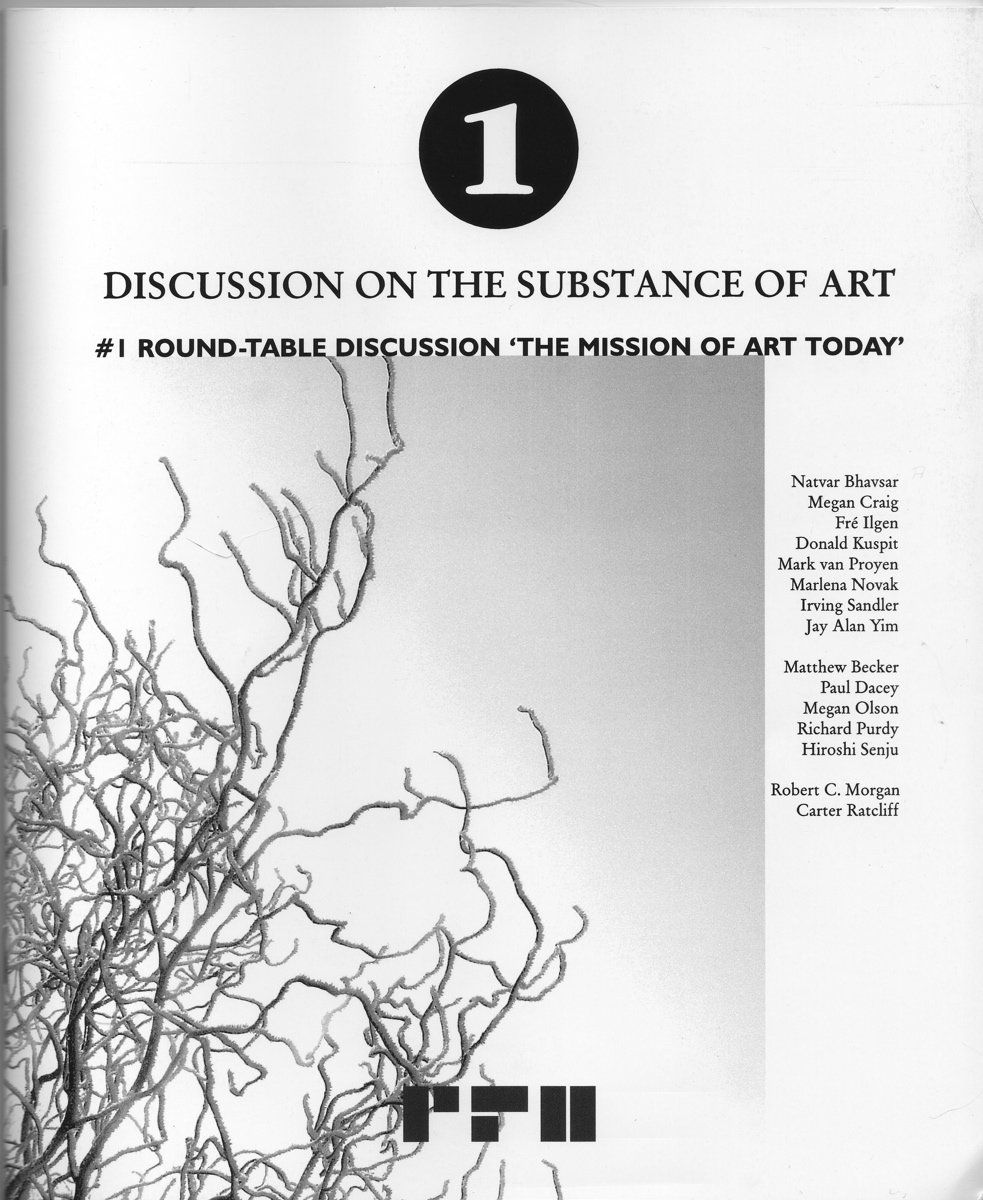 In the Spring of 2006, the report on the round-table discussion "The Mission of Art Today" was published as volume #1 in a series titled Discussion on the Substance of Art. The report is available at Sundaram Tagore Gallery, New York. 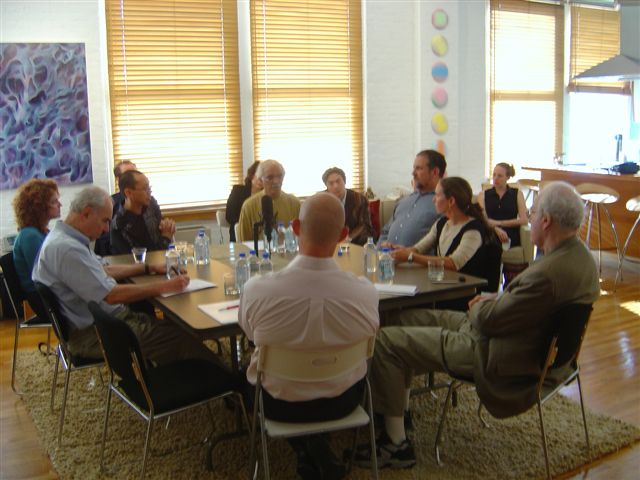 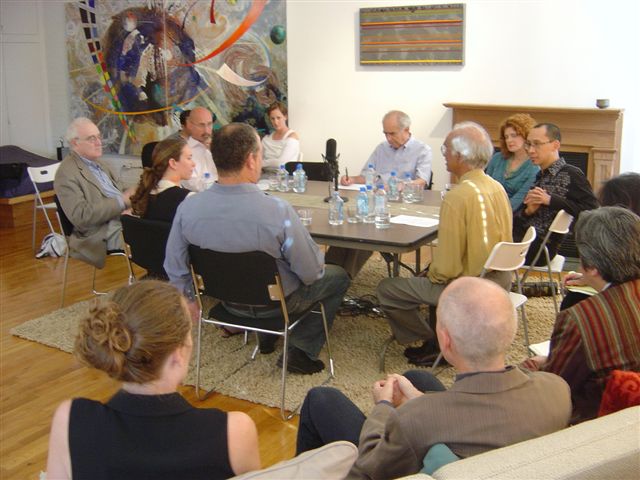 On October 1, 2005, Megan Olson was present at a round-table discussion focused mainly on the theme The Mission of Art Today" including many interesting participants such as art critics Irving Sandler, Donald Kuspit and Mark VanProyen. Also present were artists, Natvar Bhavsar,Megan Craig, Marlena Novak, Jay Alan Yim, Paul Dacey, Rick Purdy and Hiroshi Senju. A full report is being written, and future round-tables on other interesting and important topics are sure to follow. 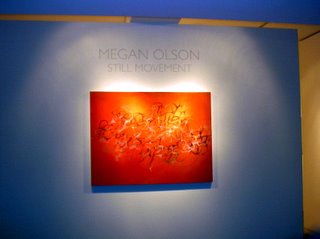 Thank you to Uelysee for taking photos of the show, and thank you to the Davidsons for another beautiful installation. 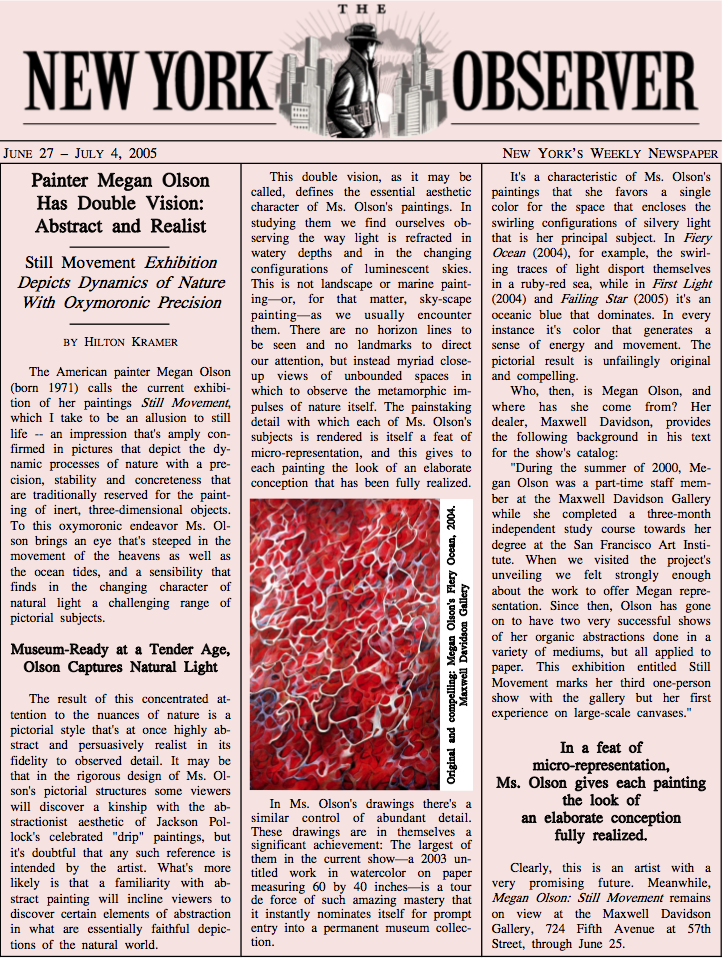 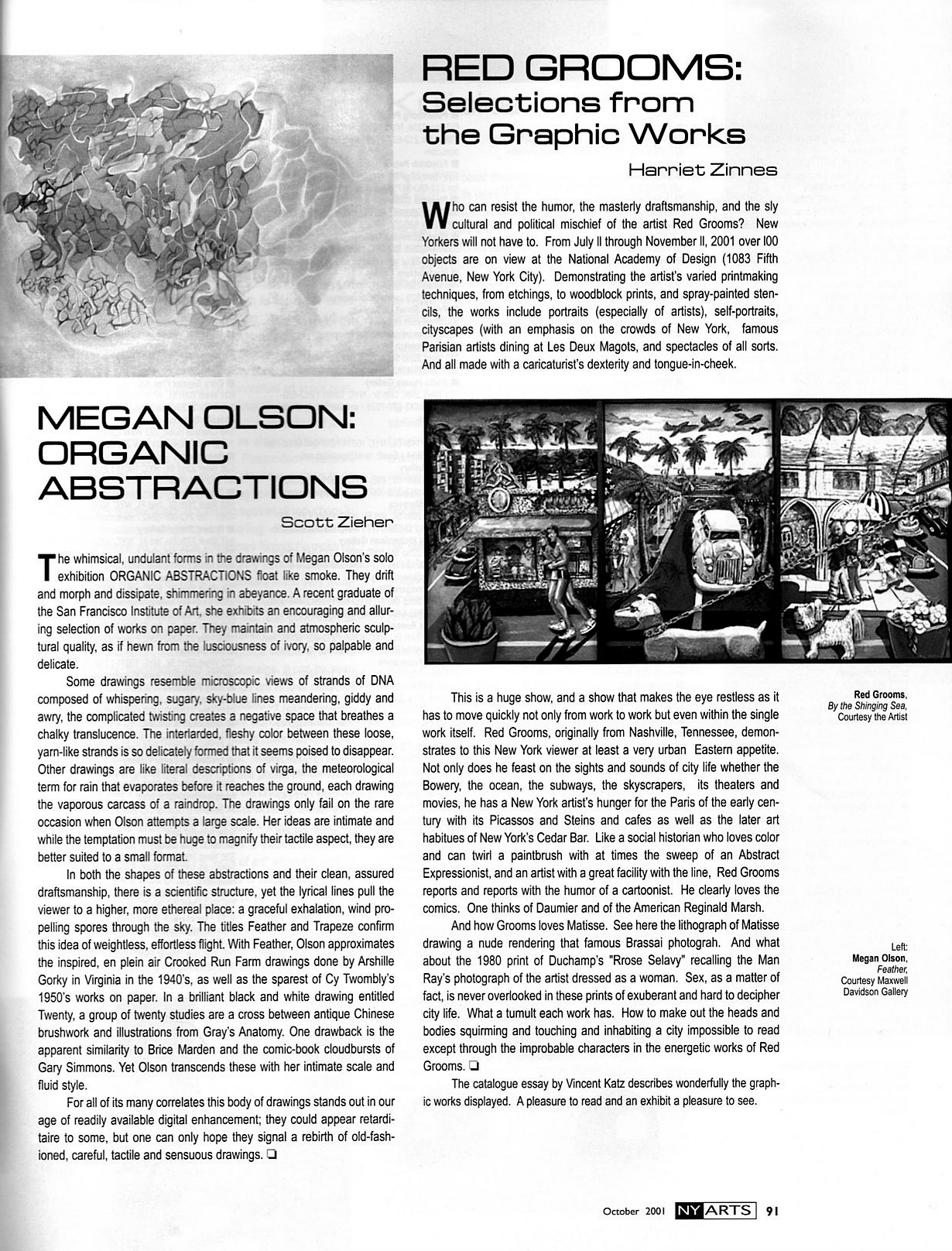